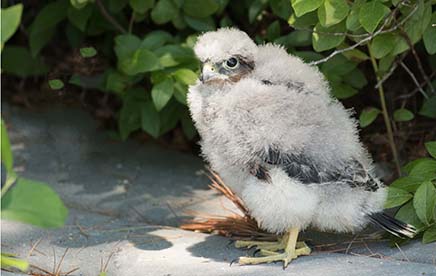 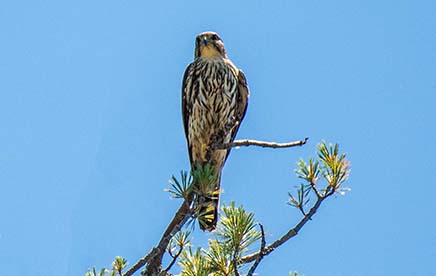 On July 7, 2018, my wife Amanda and I got a call from the wonderful Juliann Sherrill, niece of Tim and daughter of Matt. She reported that this sad little fuzzball of a bird (Figure 1) had fallen or been forced out of its nest. We went to the scene to investigate. When we arrived, the chick was making a hell of a racket while its parents made an equally hellish racket as they looked on apparently helpless from high in the nearby trees. One of the parents is pictured in Figure 2.

The Sherrill family correctly identified the baby bird as a predator (see the curved beak and crazy feet), but what make and model? Amanda and I are “old school” so we searched through a bird book. Juliann’s clever brother Sam went millennial on us and Googled it. Sam got there first. He correctly identified the bird as a “merlin” – a small falcon about 12 inches tall and quite rare in our area.

Juliann called the Audubon Society for guidance. The advice was to leave the thing alone and the parents would likely rescue it. How that could happen was a mystery to us because the chick was almost as tall as mom and dad, but who were we to question the Audubon Society? Juliann was told that if the bird was still there the next day to call back.

Well, the next day Juliann was headed out and saw the dejected little guy walking all alone down the middle of their dirt road, so she made the call. Jane Kelly of “On The Wing,” a raptor rehab facility in Epping, N.H., came to the rescue. She collected the merlin and named him “Lovell” (Jane knows the difference). She nurtured the chick and tried to make Lovell hunt, but Lovell just didn’t have a knack for it. Something was off.

Jane soon learned that Lovell has cataracts. The likely scenario was that Lovell’s parents knew the baby had the defect and couldn’t survive on its own. Their instincts told them that a further investment of time and effort would prove useless, so with one fell swoop they became empty nesters. (By the way, that’s two bird clichés in one subordinate clause.) Jane chose to keep the little guy and Lovell is now fully grown. That’s our handsome merlin as he looks today in Figure 3.

Lovell is not one to take free room and board without giving something in return. To earn his keep he accepted the position as an official ambassador of “On The Wing.” Jane takes Lovell to schools, tells his story, and shows him off. This happy ending is brought to you by our fabulous neighbors, The Sherrills, who had the compassion to care about this little fuzzball.