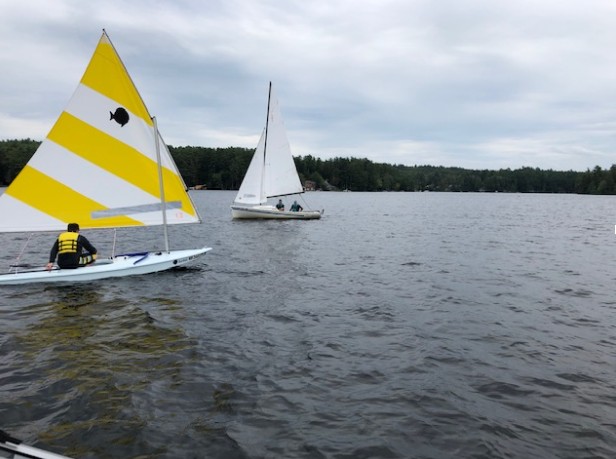 As last summer came to a close, we ran a Sunday Regatta as a first step towards bringing sailing racing back to Lovell Lake. We ran a handful of races, with several boats exchanging the lead and different skippers taking first-place finishes. By the series’ end, Dave Pawlowski was the day’s winner. He’s been sailing on Lovell Lake since he used to race with his dad (many) decades ago. On this day, he raced with one son as crew while his other son skippered his brand new Sunfish. (That Sunfish took all covid-induced-supply-chain season to arrive!) It was great fun, and everyone who participated can’t wait to race again this summer.

Let’s give them some competition! If you are new to sailing/racing don’t be intimidated. We’ll run the races so you are competing against others at your level. The plan is to put together a FUN Sunday race program. Initially, we’ll plan on a Sunday start with the first practice start commencing around 1:00 PM. Welcome are both seasoned racing skippers and anyone else with a sailboat that knows how to sail. The best way to learn to sail better, is to have another boat sail past you and learn to catch them! Don’t be concerned about the rules – there are only FIVE you’ll need to know, and we’ll teach you those. Skippers will decide on how many will crew their boat. We’ll run short races, so we get in more starts, which is the critical component most likely to influence the outcome of a race. We’ll wrap up by 3:00. I hope to get in three or more races each Sunday.

I had suggested a single class of Sunfish but we sailed both sunfish and small sloops with main and jib. I expect Sunfish will be the prominent class. Need to get a Sunfish? Go online to Craigslist, Facebook Marketplace, or Nextdoor. Someone is always done with their boat which is now taking up space in the garage or yard. There are usually several available for under $500 to over $1,000. Beware, the cheapest ones are likely to be old and heavy. You’ll have fun but you’ll never win. Need a new sail? You can get one brand new at Sunfish Direct for under $300 in lots of colors. They also sell parts.

This will be a regatta in progress. I’m sure we’ll make many changes along the way based on feedback from participants. Please talk to others you know who might want to join in. I am very excited to help revive this tradition. I’m hoping we can have at least a half dozen boats participate each Sunday to make the effort worthwhile. Anyone who wants to help with organizing is encouraged to reach out directly to me.

If you are interested in participating, please send me an email with your contact info so I can best prepare, communicate, and share the location of the racecourse, which will be influenced by the day’s weather.