In early December of 2019, there appeared to be a loon stranded on a small patch of open water in the middle of Lovell Lake. Calls were placed to NH Fish and Game as well as the Loon Preservation Committee, and John Cooley from the Loon Preservation Committee came to assess the situation on Sunday, December 8. He confirmed that the loon was a juvenile, most likely one of the two chicks that were raised over the summer, and whose life was endangered primarily due to Bald Eagle predation or simply by being frozen in. Loons need a good bit of open water to become airborne, enabling it to fly to the ocean where all loons winter while their summer lakes are frozen each winter.

I had met John Cooley several years ago as my wife Andrea and I worked with other volunteers to construct loon nesting platforms. In nearly 20 years on Lovell Lake, I was hard pressed to recall much success with our modest loon population raising a chick to juvenile status, and I was motivated to play a helping role to increase the nesting success.
On the morning of December 9, I received a call from John informing me of the stranded loon and inquiring of my availability to assist in the rescue of the loon. My answer was an immediate yes as I quickly thought of the nesting history mentioned in the preceding paragraph, but particularly thought of the successful raising of two loon chicks over the summer. Interest levels for the chicks over the summer were extremely high as many Lovell Lake residents actively supported the chicks with signs and otherwise educating people of the needs for the loons to survive.

After discussing some options, John and I agreed that the first step would be to play recorded loon calls in an effort to encourage the juvenile loon to leave the open water to seek the calling loon. As loons are not very mobile once out of the water, its capture would have been easier. Unfortunately, that did not work.

The next plan was to attempt a rescue of the loon from the open water The variables were that the lake was frozen with a thin layer of ice, the temperature was above freezing, the forecast was for temperatures to rise as the day went on, and it was heavily raining. Nevertheless, John donned his bright yellow survival suit, tied a very long rope to the shore and began pushing his small boat onto the ice. He successfully reached the open water, somehow got the boat into the water and himself into the boat. After several anxious minutes of preparation, John was successful in netting the loon. That was certainly good news, but he now faced the challenge of the return. Again, he somehow got out of the boat, got the boat back on the ice and pushed the boat to shore. Happily, he never broke through the ice! 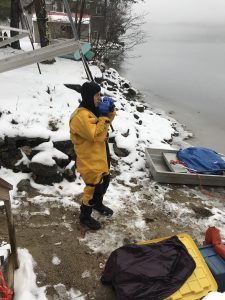 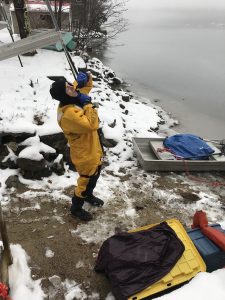 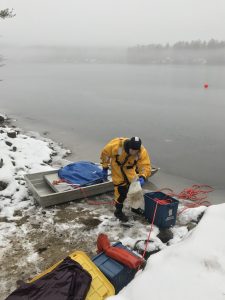 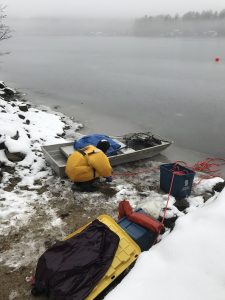 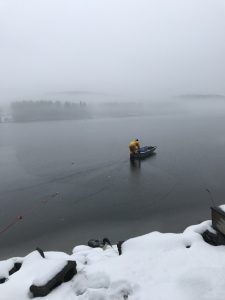 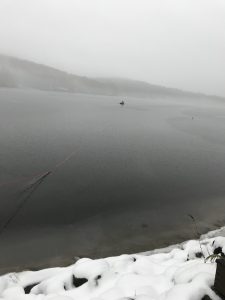 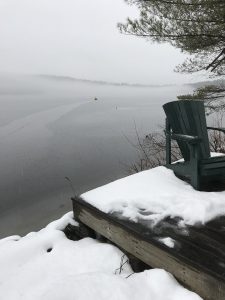 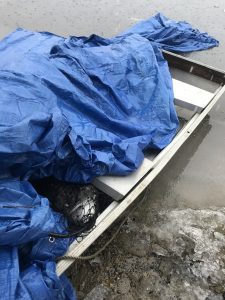 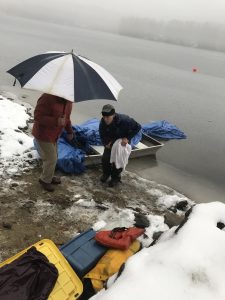 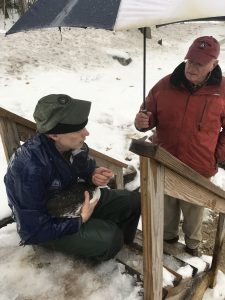 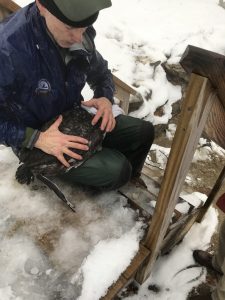 John did a quick examination of the loon and from his perspective all looked well but he wanted to bring the loon to a wildlife rehabilitator in Durham, NH. It was confirmed that the loon was a male, had no incidence of lead poisoning and was otherwise of very good size and health.

We next went to Odiorne State Park in Rye, NH where we banded the loon and released him into the ocean at about 5 pm. Unfortunately, it was dark by then and pictures were not successful, but we can share that once in the water, the loon turned and looked at us, gave a quick call, dove and came up further out in the ocean and quickly disappeared from view.
By any measurement, it was a most successful and satisfying day. It is quite certain that the juvenile was one of the two chicks raised over the summer. It is expected that he will spend the next summer or two at the ocean and then return to Lovell Lake or a neighboring lake to establish a breeding history. 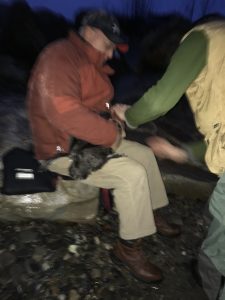 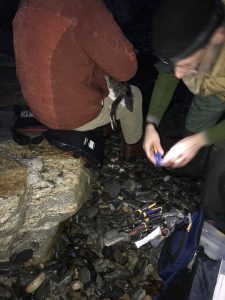 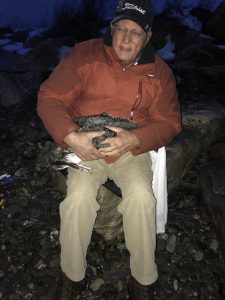